In October 1898, nine graduate nurses met at the Spokane Hotel and organized the Spokane County Nurses Association. The annual membership fee was $1.00, and a directory was issued.

In 1909 the Association was incorporated and the name changed to the Spokane County Graduate Nurses Association. This was the foundation for today’s IENA.

There are currently more than 1,911 members in the Inland Empire Nurses Association.

The IENA Board of Directors meets the first Monday of each month at 5:30 PM in the conference room upstairs from the IENA office at 222 West Mission. All members are welcome to attend.

Meetings are not held when the first Monday of the month falls on a holiday, nor do they occur during July and August.

The original logo of the WSGNA.The Early Years (1908-1920): During the early part of the 20th century, the health needs in the state of Washington were many and varied. Although the trend was for more hospitals, the bulk of hospital nursing service was provided by students, and the largest field for graduate nurses was private duty nursing in the hospital and the home.

The hours were long and the wages low. In the majority of cases, this meant 20-24 hour duty with an average wage of $3-$5 per day. It was also in this period that the need for the visiting or public health nurse became apparent. The first industrial nurses were also employed in this era – and indications were that this too would be a consistently growing field of nursing.

As the country moved into World War I, the first experience with a serious shortage of trained nurses became a reality. The need for nurses was compounded by the national influenza epidemic of 1918 and the public demands for the development of public health. These factors placed a heavy burden on the nursing profession.

In addition, the scope of nursing practice was expanding with corresponding demands for nurses in laboratory work, anesthesia and hospital staff work.

Program from the 9th Annual WSGNA Banquet in 1916. Click on image to see larger size in a new window.1908: Following two years of intense work, the delegates of the third Washington State Graduate Nurses Association (WSGNA) Convention finalize and adopt the original Articles of Incorporation.

1909: WSGNA lobbies the Legislature and achieves passage of the first Nurse Practice Act in Washington State. This was no small feat in that many legislators feared that the title “Registered Nurse” would make it possible for nurses to practice medicine, surgery or midwifery.

Nurses, however, were determined not to fail in their first organized attempt to set standards and gain status. This was the beginning of the aggressive government relations program that remains an integral part of the Washington State Nurses Association today. 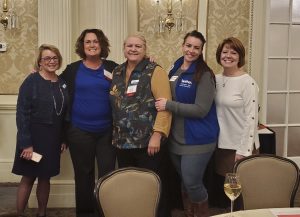